← Thran Utopia #31: The Walking Dead Flare
MTG Financial Fundamentals: Where to Speculate Next? →

Hey there! My name is Carlos, and I’m pretty excited to be doing a guest piece on Commander for Red Site Wins! I’ve been playing magic for more or less ten years now, and Commander is definitely the most fun I’ve ever had playing the game. If you’ve ever read any of my other articles over on Commandercast or Quiet Speculation, you’ll know that I’m a Johnny and a combo player at heart, and that especially holds true in Commander. The problem is that combo is so easy in this format. There are all kinds of tier one generals and strategies and try to combo off as brutally and efficiently as possible, and that’s not fun. The fun is in finding new and hilarious ways to combo.

So far I’ve published two terribad combo decks: Second Sunrise Zuberas (Tribute to Zhu) and Death Lace Combo (Reap what you Lace). Both were pretty well received by my group the first couple of times that I played them, and then got hated on pretty hard once the gimmick got old. But now I’ve got the itch to build a new bad combo deck, and I’m pretty sure this one is better and more gimmicky than both of the others. Let’s take a look at this week’s combo piece: 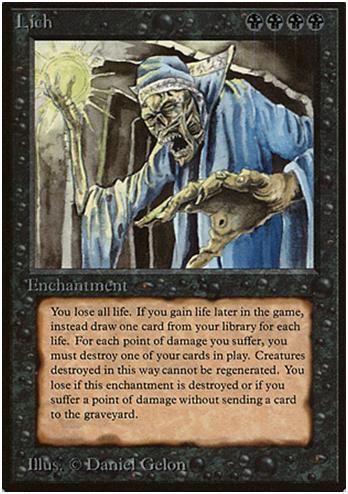 Boiling this down to the relevant text, here’s what I end up with: “Gain life, win the game. If Lich dies, lose the game.” So this is a combo deck that’s going to want to be able to cast Lich, gain a ton of life, and try to win the game in one turn. Alternatively, you want to protect Lich and yourself as best as possible, so that you don’t just die to a Krosan Grip or someone’s attack phase. Right away, here’s the framework I want to start with:

These cards give us two copies of the primary combo piece, and three mechanisms to protect it from spot removal, and one way to protect yourself so you can at least try to be a lich for more than one turn. At this point, though, we’ve got to think about how we want our Commander to interact with the pieces of the deck. Right now we’re already locked into G/B/W, which means we’re running either Teneb, the Harvester, Ghave, Guru of Spores, or Karador, Ghost Chieftain, or we’re going into five colors. Personally, I don’t want to play more colors than necessary, because of how color intensive Lich is; I also don’t see the deck playing terribly many creatures, which means that Teneb and Karador lose a lot of value. That leaves Ghave! What cards make the cut now that we’re playing Ghave?

So this is the backbone of the deck; you’ve got a ton of tutors and card selection to help find particular enchantments and combo pieces, and then you have the enchantment-based combo pieces. Ghave, Guru of Spores gives you some interesting interactions that you can build around, even without him being a centerpiece of the deck. You can run Doubling Seasonplus Earthcraft to generate infinite tokens and mana and Perilous Foraysto fix and accelerate your mana. Once the rest of the deck has been built, the remaining slots will be dedicated to making Ghave as powerful as possible, since he’s the only thing this deck has going for it besides becoming a lich.

But at some point, you’ve got to wonder, what does the deck actually do once you’ve ramped up your mana and turned yourself into a lich? Obviously the plan is going to involve gaining large quantities of life and trying to kill as many players at once as possible, but how exactly is that going to happen? There are a ton of cards that are suddenly broken in half once you’ve turned yourself into a lich:

So, we’ve got three sections of cards here, the first of which are creatures. Two of the best things you can do with a Lich in play are Children of Korlis to draw cards equal to your life total, or Martyr of Sands

to draw nine or so cards. CoincidentallyRanger of Eostutors both of those up and finds Soul Warden, which gives your general the ability “2: Draw a card.” Lastly, Weathered Wayfareris a card I try to fit into most of my decks, because it fetches powerful utility lands. This card probably isn’t quite good enough in this deck, but it’s a pet card of mine, and it’s a solid role-player.

Secondly, we have some powerful card draw engines. Peace of Mindturns every card in your hand into an Ancestral Recall. Tainted Sigilis very similar to Children of Korlisin that you’re going to draw twenty or more cards in one go with it. Lichsets your life total to zero, so you’ll have effectively lost life equal to whatever you were at before you cast Lich. Finally, once you start drawing cards, Words of Worship

At this point, I hope I’ve demonstrated that the deck isn’t going to have any trouble drawing into additional combo pieces once you resolve a Lich and get the engine rolling. The resource that is going to be stressed most when you’re trying to go off is your mana. The trick is to find a way to tie together your card drawing and mana-production engines.Mana-doubling enchantments plus Rude Awakening, and Early Harvestare an easy way to generate tons of mana. The more interesting way is the interaction between Squandered Resources, Zuran Orb, and Overgrown Estatewith Second Sunriseand Planar Birth. If you get to resolve one of those two spells, odds are you’re going to win, since you’ll draw a ton of cards and generate more than enough mana to play them all. At this point, the problem is less about whether or not you’ll be able to kill the table, but how you’re going to do it.

So, first, we’ve got a combo of sorts. Anyone who’s read any of my other articles can’t be surprised that I managed to shoehorn NimDeathmantleinto this deck, but it does serve a very particular purpose. With Azusa, Lost but Seeking, Crucible of Worlds, Perilous Forays, and a sacrifice outlet for your lands, you can pay five to put a land from your library into play tapped, and get whatever bonus you can from sacrificing your land to Zuran Orbor some such. If you add Heartbeat of Spring, then the lands you sacrifice and replay pay for all but one of the mana you need to repeat the cycle. Convoluted? Sure, but each of the pieces are more than reasonable on their own; combined, they might as well win the game. Seems good to me.

The second set of cards are the ways that you’re actually going to win the game. I wanted to fit something like Tendrils of Agony into the deck, but I figured gimmicky win conditions like swapping your life total (zero) with someone else’s (not zero) is more in the theme of the format and the deck. Stealing someone else’s life to further your own gameplan? What could be more lich-y than that! Besides, with Tendrils you run the risk of decking yourself, since drawing cards off of Lichis not optional. When it comes right down to it, the deck may need to run something like Elixir of Immortalityto make sure you don’t deck yourself and that you get a chance to cast Repay in Kind to kill the table.

Now, the last thing that the combo portion of the deck really needs is mana acceleration and fixing, so that you can reasonably be able to cast Lich or multiple spells the turn you try to go off. In a deck as mana-hungry as this one, you need a reasonable number of ramp spells and a high land count; you’ll want to be making land drops as consistently as possible.

A notable exclusion from here is Sol Ring. Beyond my personal issues with Sol Ring, I just don’t think it’s that insane in this deck. You get a ton of value out of lands, and having a lot of basic lands in play is part of the engine of the deck. In addition, many of your key spells are very color intensive. Because of those two issues, I avoided artifact mana in this deck, since they either serve the same purpose as ramp spells, but don’t interact as favorably with your engine, or they ramp better, but only produce colorless mana.

After using these seven slots for ramp spells, all that’s left to do is fill in the remaining slots with cards that interact well enough with just Ghave that they can serve to distract the table while you set yourself up to Lich them to death. Worst case scenario, I want these cards to be able to grind out a game mostly on their own merit, while still contributing to the Lich plan in the midgame. These are the Ghave interactions I thought were most powerful:

Here we’ve got a good combination of stuff; some ways to control the board or disrupt other players’ hands while you’re setting up your combo, or to draw cards while you’re mid-combo, or just digging for pieces. I’d have loved to fit in another anthem effect, or maybe even Leyline of Vitality, but I think that’s getting just a little too cute, and I want to be sure that the focus of the deck is still on the terrible combo!

Finally, let’s add a manabase to finish this monstrosity up! Most of the manabase is going to be comprised of basics to play well with Planar Birth, but there are a couple of non-basics that play well enough with the deck that I wanted to include them. Here’s what I came up with:

← Thran Utopia #31: The Walking Dead Flare
MTG Financial Fundamentals: Where to Speculate Next? →