The Commander’s Chair – Possibilities of Innistrad

Innistrad has been out for a few weeks now and so far I have seen very few cards from the set that have had an impact on Commander. We are a little too early into the set to have enough flip cards to create a new themed deck. However, if you were a fan of Vampires and Zombies, Innistrad has given us some great new tools to work with.  Today I am going to be reviewing some of the tribal gems from Innistrad.

It appears that Wizards is set on making Vampires a real tribe for more than just one standard season. With the strong Zendikar vampires rolling into this new crop of Innistrad bloodsuckers, you can be reasonable assured that zampires are going to be around for some time. In addition, Wizards has posted 3 different Vampire lords in the last 3 core sets. It feels like Wizards is playing catch up with Vampires compared to the older tribes. 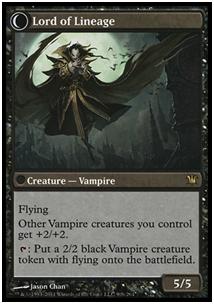 Bloodline Keeper is perfect in any vampire deck. This is the vampire equivalent to Imperious Perfect.  I like that this guy can flip himself and doesn’t have a mode to flip back. I have much more confidence in flip cards that do not randomly lose effectiveness because your opponent cast too many spells. 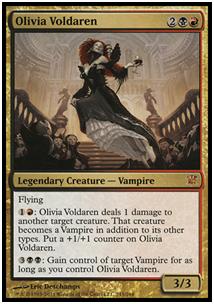 Olivia is going to be the go to legend for vampire decks for the time being.   She is the vampire equivalent to Memnarch. Red and Black do not have nearly as easy a time generating infinite mana as blue does, but even so paying 7 mana a turn to take control of a creature and boost your Commander is very nice.   Keep in mind that unlike Memnarch, if Olivia dies people get their creatures back.  Sometimes it may be better to equip her with Blade of the Bloodchief and Basilisk Collar and just use her to wipe the board and beat face.

This guy is current priced at . . . well he is basically a free card. People will just give him to you. Perhaps it is because of the art. I would not expect him to be free forever. Uncommon lords become desireable to casual players over time and their price rises. Anyways, this is a surprisingly impressive creature to have in Vampire tribal decks. In Commander, combining this with Contagion Engine makes for some gargantuan vampires.

Zombies are a traditional tribe for magic and I am glad to see that wizards did not abandon them in favor of jumping on the Twilight bandwagon. We didn’t really get any new lords in this set, but I was happy to see all the great Zombies we got anyways. I hope to see many of these in your Mimeoplasm contest decks.

I don’t think I need to say anything about this. It is a surprisingly efficient costed spell that should end the game quickly. Even if they wipe the board, you just flash it back and fight again.

This is the newest anti-tuck tech. Unlike most of the ways to deal with your Commander being tucked, this one doesn’t sacrifice a tutor. It can also save you from an unfortunate use of Tunnel Vision.

You can pick this up for $1 right now. It has some of the best art in the set and is one of the best zombie tribal cards ever printed. Get your foils before these rise in price, because the foils will be expensive in the future.

Wow, thank you wizards! I have not seen this go off yet, but I am looking forward to it in the near future. If someone has seen this work, please send me a message with the story. 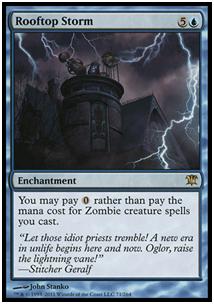 This was one of the reasons I chose Mimeoplasm for the contest. I want to see how you can abuse this card. (Hint: Future Sight)

While I am not a fan of big vanilla creatures with obvious downside. I figured someone would point this out if I did not. For the record, I don’t think he is good and I don’t think you should play him in a deck unless you find a way to combo with him.  Size doesn’t always matter.

I had to see this guy in action before I was willing to believe he was good. He is amazing in mill decks, absolutely outstanding. He exiles Eldrazi, the bane of any mill strategy! In Zombie decks, he is still good because you can quickly bring a horde onto the table and then sacrifice him and swing for lethal.

There has been only one submission to the Mimeoplasm contest. If you want to altered Mimeoplasm or fatpack, this could be the easiest contest you ever enter. The only rules are that your Commander must be the Mimeoplasm and you must have at least 25 cards in the deck that either Zombie creatures or cards that generate zombie tokens. Please submit your entries to swordstoplow(at)gmail(dot)com. Multiple prizes will be given out. The deadline will be midnight PST on Halloween. The winner of this contest will receive this, in addition to an Innistrad fatpack;

None!  Somehow I have managed to collect absolutely none of the cards on my list. If anyone has foil Japanese/Chinese/Russian/Korean(yay they have Korean foils now) from the list posted in The Redemption, please contact me for money or some good trades.  I will be at worlds trading as hard as I possibly can for this deck as well as playing a ton of Commander.  I will likely not be playing in the Commander Qs.  I have played in a fair number of Commander Tournaments and never felt good about myself afterwards.

I am going to be shifting most of my time to writing over at CommanderCast writing the Accumulated Knowledge series. I will try to get back on the podcast as soon as I get either a wireless headset or a USB headset since the audio jacks on my laptop died. Next month is Crossover month at CommanderCast, so check me out as a guest star in episode 8, this season on CommanderCast.

I like building and tuning decks to make them more fun and more effective.
View all posts by SwordsToPlow »